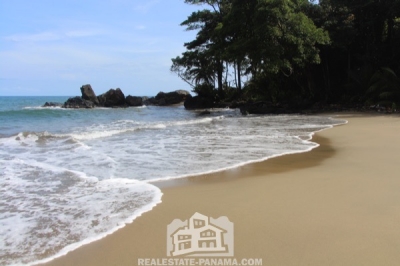 The property has three cove beaches with cream color sand. The topography gently slopes upward from the waterfront to the interior of the property. The property borders the Uvero River on the Northwestern boundary with a tremendous biodiversity and wildlife. The interior offers a few small streams, flowing year round, providing plenty of fresh water. The property gently slopes upward from the ocean front towards the interior land. The elevated bluffs offer dramatic coastal views of the forested, misty mountains draping to the ocean. The property is extremely rich in mineral resources, has an abundance of wildlife, birds and exotic, hardwood trees.

Coclecito, Costa Abajo, Colon: The Caribbean coastline is extremely tropical with countless beaches, river mouths and numerous small villages. The village closest to this property is Coclecito. Cruising down the coastline you can see numerous properties have been acquired, fenced and have some minor construction.

Regional Investment: The continuation of the Coastal Highway will pass through an extensión of this property. The first cellular tower was just installed in the area. The property is located in a region of Panama that is experiencing tremendous investment by local and foreign investors. There are several projects underway including the Minera Panama project, approximately 15 minutes from the property, and coastal highway project. (www.minerapanama.com)

Access and Attractions: The property is approximately 55 minutes from Panama City by helicopter or 3 hours in car plus 2 hours in boat. Further up the coast is the Archipelago of Bocas del Toro, the popular tourist destination. The Costa Abajo Region and Caribbean Coast offer and abundance of outdoor activites including bird watching, diving and exploring the magnificent reef and water along this lush, tropical coast.

The Atlantic Bridge: The new bridge will span the Atlantic Ocean entrance to the canal. It features a 1,050-meter dual carriageway, cable-stayed span. The 530-meter main span will be the longest concrete four-lane cable-stayed structure in the world. The lengths of the east and west approach roads and viaducts will be 2,031 meters. The bridge was designed by the China Communication Construction Company (CCCC) consisting of HPDI and Louis Berger Group and in October 2012, the Panama Canal Authority awarded a contract to The French company Vinci Construction Grands Projects.

The Coastal Highway: The Minister of Public Works, Ramon Arosemena Crespo, announced the construction of the road on the section from Miguel de la Borda to Cocle del Norte in Costa Abajo, Donoso district in the province of Colon, benefiting more than 5,000 inhabitants of this remote region. The project for the construction of the coastal highway, about 40 km (240km in total), was presented by the Minister Arosemena during the Cabinet Council in Colon. The work will impact the social, economic and tourist development of populations as Quebrada Grande, Quebradita, Río Diego, Río Cirí, Aguacate, Limón de Donoso, Coclé del Norte and other surrounding towns.

Legal Status: The property is titled with application to title ocean front consession area (13.3HAS) already submitted. All requirements with "ANATI", and all government agencies, to obtain Title, have been fulfilled.

Published in Caribbean
More in this category: « Caribbean Ocean Front in Costa Abajo Colon Ocean View Caribbean One Bedroom Apartment »
back to top