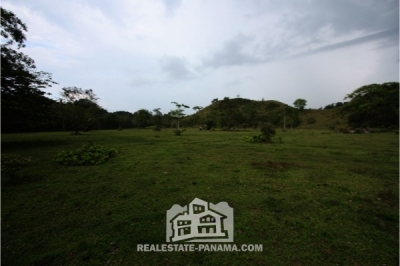 Available for sale near Nombre de Dios in Colon is 320 hectares (790 acres) of competitively priced caribbean cattle farm land with one owner for the past 30 years. Located approximately two hours from Panama City en route to the popular tourist attraction of historic Portobelo Bay and the popular beach destination of Isla Grande. The entrance to the property is a 2.5km drive down a rural gravel road with one water crossing accessible via sedan in the summer and 4x4 in the wetter months 7-8 months out of the year.

The farm includes several rural structures including chutes, corrals, a rustic main house in addition to some fenced in areas. Natural property features include: rolling hills with some bottoms (80%), primary forest with timber (20%), a year round stream running down the center of the farm, Ratana grass in fenced areas, a year round river bordering the farm, and a fertile area of Colon with rain year round. At it's peak, the farm was over 550 hectares with approximately 400 cattle. Currently there are 156 Brahman cattle and 3 pure breed Simbra bulls. Calves and Cows are available separately for $350 each and $450 respectively. With no urgency to pay property taxes, the majority of the property is pre-titled with 28 hectares titled. The borders have been measured and all neighbors except a recent purchaser have signed off on the borders in preparation for titling process. The owner will accept a buyer who requires titled land by staggering installments throughout the process with all fees to be borne by the buyer.

Published in Farm
Tagged under