Sister Moon elaborates on a cliff overlooking the sea in one of the most beautiful in the Caribbean. Lonely Planet described it as the home of the modern Robinson Crusoe. Nurture your body, mind and spirit in a tropical atmosphere with breathtaking sea views forests, impressive rock formations, flowing palm trees where you can enjoy an atmosphere of rest and privacy Cozy cottages, each with its own bathroom and private terrace facing a full bar the pool that winds on the sea A restaurant with the most delicious and varied cuisine, full of flavors typical of the region and international cuisine. All kinds of entertainment and activities: surfing, diving, hiking, water sports, fishing, navigation, and more. A cheerful fishing village less than 20 minutes walk (3 min. by boat).

San Marino Ocean Front is a unique and exclusive development located on the Caribbean side of Republic of Panama, approximately 90 minutes from Panama City. It consists of 108 lots which are surrounded by Ocean and the Green Rain Forest Hills. Another benefit is the Marina with break water for safe usage of the boat ramp which enhances the entire development.  It has an extensive beach area for walking, swimming or to do some snorkeling. Also it has a natural reef for those who like to see the sunset.

San Marino Ocean Front has a Club House overlooking the Ocean with swimming pool, gazebos, barbecue, bar area for any resident or private meeting. All the streets in the community are paved and private with a perimeter wall and gated security.

Captured around lunchtime while staying in Bananas Resort, located on Isla Grande in Colon. Isla Grande is a popular caribbean vacation/second home area for upper middle class panamanians. The Bananas Resort is located on the open ocean side of Isla Grande, a short boat ride from main land in La Guaira, a sleepy fishing village. Bananas has its own parking area on the mainland and shuttles guests back and forth over the relatively calm waters via small 15hp wooden boats. Bananas resort is arguably the best hotel within a 2 hours distance this side of Panama, second only to Coral Lodge further along the coast towards San Blas. If traveling on a budget, be sure to inquire about the European Plan, otherwise the American Plan will do. A little known fact is that Bananas Resort is built and operates on possessory rights property, and not titled property as some might think. A revelation to some who wish to own and operate a beachfront business while paying no property taxes...whodda thunk it. 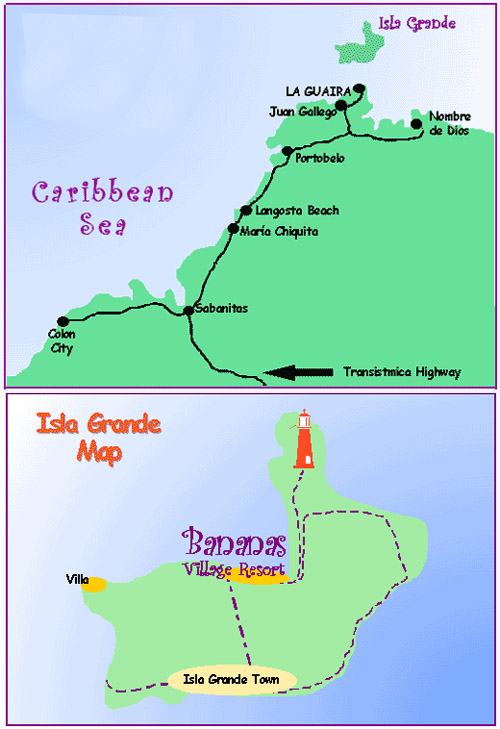 This carnival (2008), I was able to visit San Blas with some friends. We left from Albrook Airport (Marcos A. Gelbert) and arrived in El Porvenir about 40 minutes later. On the way back from El Porvenir, we stopped at Corazon de Jesus which neighbors Nargana, and are said to be the most modern islands in Kuna Yala.

This video was shot on a recent visit to Nombre de Dios, Colon. The video is of the bay of Nombre de Dios, and was taken early in the morning. As you can see, the morning was a bit overcast but the sun did finally show itself later on in the day. Nombre de Dios is about a 2.5 hour drive from Panama City, and is a sleepy fishing town located on the Atlantic Coast of Panama. With the construction of the Corredor Norte currently underway, the drive time should drop considerably.

Isla de Cañas is located in the Province of Los Santos in the District of Tonosí on a beach 13 kilometers long. Considered one of the most important nesting sites for sea turtles (species Lapidochelis Olivacea) in the Pacific of Panama. The National Park refugee also protects an important habitat of mangrove ecosystems of different marine species. Near the refuge is a picturesque fishing village which together with the staff of the National Environmental Authority (ANAM) protect and manage the thousands of turtles that arrive on its shores each year.